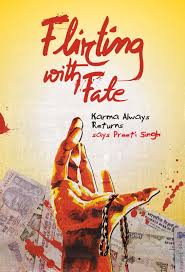 Review: ‘Flirting with Fate’ is the debut novel by author Preeti Singh who not just makes a powerful foray into the world of writing but also makes an indelible impact. The tagline of this crime fiction reads ‘Karma always returns’, and even though it may seem a tad didactic at first glance, the plot is surprisingly fresh and the story irresistibly engaging. Some may feel that this is some piece of philosophy going preachy on stuff like ‘karma’ and blah, blah, blah. On the contrary, there is no such preaching and only a subtle implication of ‘karma’ towards the end.

The story revolves around Anand whose life is sketched out meticulously right from his birth till his downfall. The major portion of the book is set in ‘Palash’, an orphanage, and this is where the author has scored. There is a rustic feel which is very heart-rending and reminiscent of old Bollywood capers like ‘Mr. India’ and ‘Brahmachaari’. The life in a shabby and poverty-stricken orphanage has been described in a charming manner. But just when the readers begin to settle down in the comfortable milieu of serenity and harmonious togetherness, they are jolted out of their stupor with a series of shocks.

Despite being pampered and nurtured like a royal prince, this ungrateful boy (Anand) turns heartless, greedy, salacious and vengeful. He is a psycho child who takes sadistic pleasure in harming others. The diabolical mind of the pre-teen child has no repentance as it conceives plans of carrying out gruesome murders for personal gain. The number of crimes escalates with each passing year, and Anand gets away with them with his effortless deftness.

The book has been written with a lot of heart, and it is apparent from the way the characters have been sketched. The portrayal of a child’s innermost secrets, unspeakable fantasies and impenetrable thoughts is really commendable because of its depth and precision. The language is lucid and simple. But it is the narrative style which deserves the highest adulations. The author, in a stroke of serendipity, sketches an animal character whose depiction is a fine blend between humor and satire. The orphanage houses a dog named ‘Fluffy’ and it is his soliloquies and monologues which make the readers laugh, cry and think at the same time. Fluffy also assumes the role of a narrator and his characterization has plenty of innovative creativity, thereby making him a class apart. Take for instance his aggrieved monologue when an ageing Fluffy lets out a sigh and tells the readers that Penny (the neighborhood bitch) doesn’t pay him any attention and he fears he would die a virgin.

Other characters- be it the caring old lady Sribehen or the soft-hearted Mr. Gonsalves or the love-deprived Sunita- are chalked out well and have been given adequate space. But by and large, we see the world through the eyes of Anand and how he relates himself to the non-central characters.

There are a few glitches which the author and her team seem to have missed out on. The age differences between the characters fluctuate a lot, and even though this does not affect the storyline directly, it leaves a dubious impression on a pedantic reader’s mind. But this is a minor glitch and may easily escape the eye of a casual reader.

The climax too is refreshing and even though it seems a bit hurried, it goes with the theme of open ending. This is another bold move by the author who chooses to ditch the conventional, clichéd path and trace out her original route fearlessly.
All in all, ‘Flirting with Fate’ is a riveting read and an exhibition of masterly narration. It will shake you, stir you, shock you but leave you satisfied. A shockingly compelling read!

PS- You may not like this book if you only prefer sexualized mushy romances dished out by today’s modern day authors. Even though, this book has a few love scenes, its chief strength is its plot & narration.

[This book has been reviewed by me on special request by author Preeti Singh.]

Check out the book above
Posted by Ritesh Agarwal at 1:39 AM