Sachin Tendulkar and the Curse of the 99 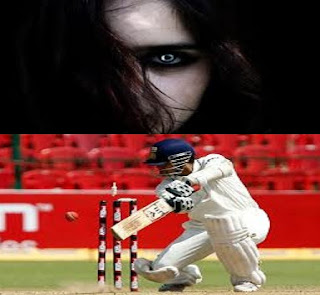 Sachin Tendulkar, the undisputed deity of cricket and the 'ladlaa beta' of India is presently chasing his 100th international century. As I write this, the Master has just walked off after falling on 73 at the ongoing Boxing day test at the famous Melbourne Cricket Ground, 27 runs shy of the coveted crown that, so far, been worn by none. Tendulkar (often called Ton-dulkar) has been stranded on 99 International centuries since his glorious century against South Africa in March at the World Cup. Since then, he has had close to 17 attempts to get to the tally of hundred 100s but has been thwarted by what we can, now, call the 'curse of the 99'.

It's not that he has been nursing a bad form or is not piling up runs for his team. He has been in great nick (as Always) and, at times, in ominous form and has come at a sniffing distance in no less than 4 occasions including a couple of 90s to his credit. But he has been denied what is rightfully his by this curse that refuses to abandon him and has loyally stuck to him like an ever-creeping shadow. From India to England to India again and now to Australia, this curse has hounded him and the millions of his devotees in a horrifying display of its dark prowess. His prolonged stay on '99' is ironic since Sachin had chosen to flash '99' as his jersey number for a long time during his olden, golden days. His history seems to have resurrected in the form of a surreal curse to torment his present.....
Sachin, himself, is pursuing his relentless chase for this much-awaited century with a child-like obsession. In some ways, Tendulkar is no less than an enthusiastic child! A child, no matter how much he is scolded or punished, continues his yearnings for fanciful objects like the unreachable moon. Tendulkar, too, despite being thwarted, continues his pursuit to reach an ethereal space where no man, living or dead, has walked before. Sachin, with his baggage of 99 tons, has already conquered a summit that no cricketer has scaled or shall ever scale (though, of course, cricket is proverbially 'a game of glorious uncertainties). But with this entire world so fascinated with 'numbers', this magician must wield his willow to conjure the 'number 100' to register his permanent stamp of dominance in the history books. 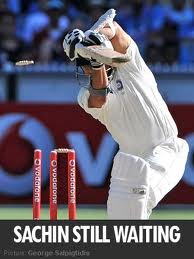 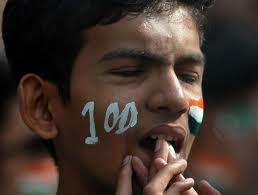 Today, yet again, he came agonizingly close to this magic figure before getting bowled out by Peter Siddle on 73 in front of a colossal crowd of 50,000 spectators watching him with awe & reverence as he crafted a flawless, sublime innings that totally deserved the standing ovation which he spontaneously got. In fact, his dismissal at the very peak of his innings can be seen as the depiction of imperfectness in a most perfect manner. (To read more about the 'perfect' imperfectness, read: http://chocolateboy-ritesh.blogspot.com/2011/12/sachin-tendulkar-perfectness-of-being.html).
And even though, he failed to cross the final  hurdle, the breathless pace of the inning seemed to bewitch the MCG viewers and freeze the cascading time. Like a super computer, he seemed to have fed himself with important data as he headed onto the pitch where he exhibited impeccable timing, technique and innovation to negotiate the outswingers and upper-cut the bouncers. 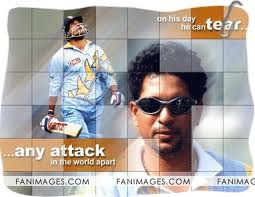 But the curse, eventually, had the last smile as it devoured the God at a time when he was looking mightily invincible. The curse can also be compared to a desert's mirage which lures the thirsty traveler to journey through sand & sun looking for that elixir of life only to disappoint him in the end. Tendulkar, too, does all the hard work and builds his way towards the waiting milestone only to be denied at the last moment. The Master has fallen a prey yet again to the bait thrown by this 'curse of the 99' in a most bizarre, unreal fashion.
But the final battle shall certainly be won by Tendulkar, the voyage will be journeyed one day, the 100th hundred shall surely be scored....because this 'elixir' lies concealed in a holy grail from which only the God is allowed to drink.......
Posted by Ritesh Agarwal at 6:47 PM No comments:

Boxing Day Test: Who will bell the kangaroo? 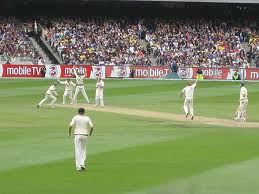 With Christmas already upon us, it's just a few hours left for the anticipated Boxing Day test to begin. As i write this, the prospect of a riveting contest between India and arch rivals Australia seems too enticing to let go even though I'm thoroughly aware that I will need to get up at 5 am if I wish not to miss any part of this promising contest. And as far as I am concerned, these are pretty audacious thoughts since I'm a late sleeper and the idea of saying goodbye to the cozy, fluffy blankets (it's freezing here in Kolkata) at such an early time is not giving me great comfort. Even the local crows are postponing their morning cacophony by an hour or so to avoid risking tonsillitis in the frigid weather.

Now, as an avid cricket lover, it is my duty to deeply contemplate about the chances of our Indian team conquering the Aussies in their own country. Some so-called experts are suggesting that Indians face a weakened Aussie line-up this time and, therefore, have a great chance of beating them. But underestimating the once-invincible kangaroos in their own den is, I think, a grave mistake. After all, as I hit the pillows every night and close my eyes to stroll into my little, imaginary world, I wonder who, after all, will bell the kangaroo?
Yes, we have a strong bludgeoning marauder in Virender Sehwag and a gritty,silent worker in Gambhir! Yes, we do boast of one of the strongest middle order backbones of world cricket in Rahul 'Wall' Dravid, 'Sachin 'God' Tendulkar and VVS 'Special' Laxman. But then the opposition, too, has its potent weapon in the young James Pattinson and the electric Pat Cummins (though Cummins is nursing an injury and is unlikely to appear in the picture before the 4th test). Our experienced batsmen (not to forget the young guns like Virat Kohli and Rohit Sharma) led by a World Cup-winning captain (Dhoni can make runs as well) can be trusted to put on some runs, nevertheless. 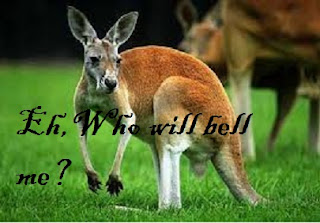 But the chief problem lies in our bowling department. Though we have 2 reliable spinners in Pragyan Ojha and the maverick magician Ravichandran Ashwin (fresh from a fantastic debut test series against the Windies) but our pace battery is almost completely dependent on Zaheer Khan. Ishant Sharma is inconsistent while Umesh Yadav is young and hasn't done anything spectacular. Zaheer, too, is unlikely to be at his peak fitness or rhythm. In such a scenario, it may get difficult to restrict the Kangaroo batsmen to a low total. It's also a pity that the billion-plus populated India has failed to come out with even one first class fast bowler who can be consistent. Irfan Pathan showed some class earlier in his career but then plummeted into the bottomless depths of gloom. Ditto for Munaf Patel..

You may be thinking that I'm underestimating the powers of our indigenous bowlers. As an anxious Indian cricket fan, it is my birth right to take a pessimistic path so that I can fully appreciate & relish the joys later on if India does come out triumphant. And fans like me, critics like Chappels and soothsayers like Bejan Daruwala (ya, that's a nice name) will keep on presenting their individual cases. Only the breaking dawn shall truly disclose who'll actually do the belling of the kangaroo.......
~Ritesh.
Posted by Ritesh Agarwal at 4:14 PM 3 comments:

Sachin Tendulkar: The perfectness of being an imperfect 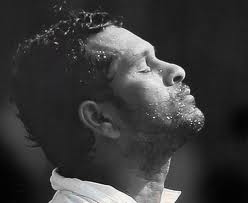 ‘Perfection’ is something which stares at you like a star from the zenith far above. You crave to reach out to it which would, undoubtedly, take you to the top of the heavens from where you can survey your earthly subjects looking up at you in awe. Sachin Tendulkar stands on that pantheon like a deity who evokes awe amongst all his worshippers. Even the ground on which he walks is considered sacred by millions of his devotees.
Despite standing on the top, he hasn’t yet reached out to that hallowed ‘perfection’. Currently, he is being haunted by the ghost of ’99 centuries’ which has burdened his mind and infected the sanctity of the pure soul. Looking for that elusive 100th ton, a feat never accomplished before by a man so far, every time he walks out to the pitch, his devotees gather all around him akin to a throng of hypnotized onlookers gazing at a magician who has promised them his most remarkable trick ever. They hold their breath waiting for that inevitable moment when the conjurer conjures that rabbit out of the thin air; something which will eventually happen no matter the amount of time it takes. The inevitability of Tendulkar’s 100th century is never questioned by his devoted admirers. It will definitely come, may be in a few weeks or months, or may be in years, but they are prepared to hold their breath till that time. 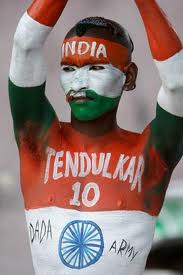 Tendulkar, himself, has been so accustomed to the center stage that attaching stage-fright with him seems tasteless. He has spent a greater part of his 38 years on the field than off it. The dust-brown batting pitch enveloped by the green grass is far more homely to him than his Mumbai’s mansion. Yet the God himself seems to be having the jitters every time he approaches that coveted milestone. That 100th century is like a seductive, enchanting maiden who battles her eyelashes inviting him to her warm embrace. Lured and tempted, he rushes forward to get forlorn amongst the fragrance of her radiant tresses but the moment he approaches her, she disappears leaving him unquenched in his state of confounded trance. 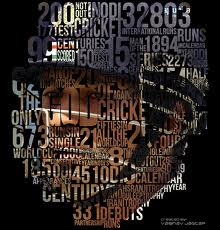 The fact, that he is in the need to exorcise the ghost of 99, robs from him the crown of perfection. Yes, he is not perfect! Yes, he is not error-free! It is his state of anxious desperation to reach to his quest that lends him the tag of imperfection. But it is this imperfection that makes his batting so intriguing, so charismatic and so unpredictable. You never know when his blade will caress the ball to the fences! You never know when his hand shall slice that perfect drive! And you never know when this magician will churn out that 100th ton, conjure that expectantly awaited rabbit that has paused our lives since the World Cup march!
The ‘God of cricket’ is flawed; he has his imperfections but it is his imperfections that make him so irresistible. He is imperfect but he is so in a very perfect manner. Of course, pretty soon, the wizard will definitely wield his wand again and produce that number 100. But it is the unpredictability of that epic moment where all the magic lies……….
(By Ritesh Agarwal, a tireless Tendulkar fan)